IBM Cloud Object Storage: The foundation of the digital and cognitive eras!

Rated by Gartner as the leader for Overall Use Case in its "Critical Capabilities for Object Storage" study in March 2016, we view IBM Cloud Object Storage as the key to not only solving immediate unstructured data challenges, but also serving as the digital foundation to enabling key enterprise initiatives of the digital era, including IoT, cloud, cognitive, deep learning, social, mobile, and next-generation analytics.

At Mark III, we've had IBM Cloud Object Storage up and running in our lab since the Cleversafe acquisition was announced by IBM in 2015, and have worked hand in hand with our clients on use cases ranging from video data to backups to archival data to digital content repository data and many more, since that time.  In short, if you need to store unstructured data in a cost-effective and flexible manner with the possibility of scaling to 100s of PBs (most likely spanning multiple sites) and be positioned for future digital initiatives, IBM Cloud Object Storage represents a truly unique platform to enable this, all with simple access via popular object storage APIs (S3, OpenStack Swift, etc).

Here's a look at our very first IBM Cloud Object Storage (Cleversafe) dsNet instance we spun up last year in our demo center/lab, just after the acquisition was announced by IBM: 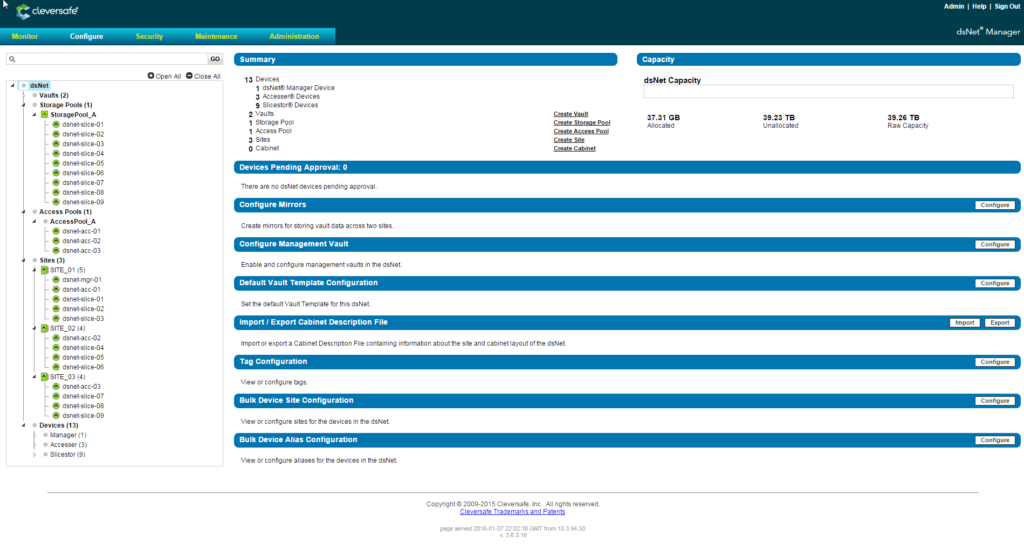 We're huge fans of IBM Cloud Object Storage partly because of the versatility in how you can set it up.  Cleversafe, as a company, was founded in 2004 first as an on-premise, object storage platform years BEFORE any of the mainstream public cloud object storage platforms existed.  As a result of this head start, Cleversafe was able to build a lead in the industry by loading up on advanced features and offering rock-solid stability, due to its vast market adoption and customer field cycles.

To get your imagination going on how this might apply to your own digital initiatives, here are just some of the platform/app concepts that we've built on top of IBM Cloud Object Storage: