Mark III Systems, along with some of our key technology ecosystem partners, hosted the first ever Dev Day Houston meetup and expo last week at Karbach Brewing Company in Houston.

Described as a "meetup and expo for ALL Houston tech professionals that build amazing software for enterprises, organizations, service providers, research institutions, and everything in between," Dev Day was both an incredible exchange of ideas on WHAT to build and HOW to build software, in addition to being an awesome meeting of the Houston enterprise developer community. 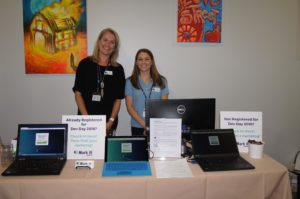 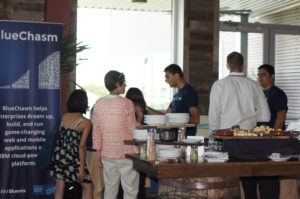 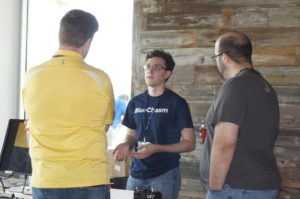 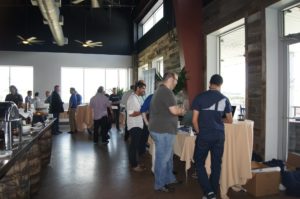 In case you missed it (or if you weren't able to get to all the tables), here's an in-depth recap at some of the tech tables we had at Dev Day:

This table had a cognitive drone that was built by our BlueChasm dev team focused on being able to "see" using an onboard camera and being able to store images and analyze those images using IBM Cloud Object Storage (Cleversafe) and IBM Watson, respectively.  All of this intelligence is powered by our open platform written on top of IBM Bluemix.

Enterprise use cases?  Any scenario which requires visual recognition of written content/people/objects at a distance that's "costly" for businesses to traverse (in terms of either manpower or time) or into a location that's considered dangerous (i.e. heights/proximity to power lines/chemical leaks/etc).  Our favorite example is the usage of drones to visually verify/analyze inventory in a very large warehouse, although the most popular examples are probably physical security systems or damage assessments in hard to reach places in the insurance industry.

We originally had planned on trying to fly the drone at the venue (we stuck with just showing the visual recognition in action), but with the low ceilings and ceiling fans in the venue, we don't think our friends at Karbach would've liked that very much (one might say our coding skills are better than our piloting skills :) ) 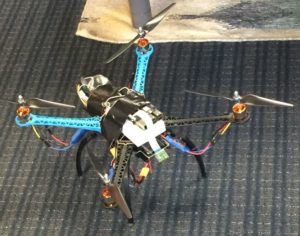 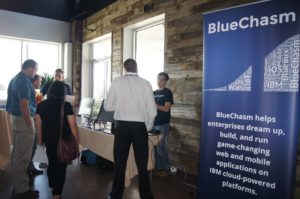 In addition to the drone, we had our Video Recon video analytics platform on display.  For this event format, we used our iPad and an iOS app we designed to showcase the functionality.  For those not aware, Video Recon is a video analytics platform that our team put together that uses IBM Watson, Bluemix, and IBM Cloud Object Storage (Cleversafe), in combination with some of our own algorithms, to enable a user to leverage Watson to auto-tag a video with what Watson "sees" in the video.  These tags will allow the video to be searched, filtered, and analyzed (after tagging), all without any form of manual tagging or labeling that's required with most video/audio storage software platforms today.

BlueChasm (Mark III's digital development arm) had a table that featured a couple different cognitive demo platforms also built around IBM Watson, Bluemix, and IBM Cloud Object Storage.  The first was a "Suggest-a-Song" digital app that uses IBM Watson to analyze the lyrics of a song you might like and suggest another song with similar lyrics based on an algorithm. 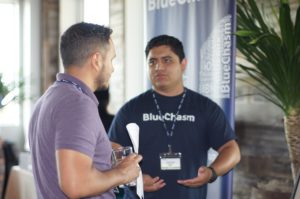 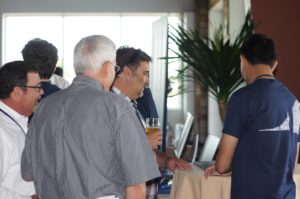 The second demo we had on hand was a real-time demonstration of the "Visual Communications" platform that our team built, also with IBM Watson, Bluemix, and IBM Cloud Object Storage.  If you aren't familiar with the Visual Communications platform, it uses a camera and IBM Watson to "look" at the viewer of a screen, and based on the viewer's age and gender, it shows them some form of highly targeted pre-loaded content (which can be a video, image, or audio recording).  In the past, we've typically demonstrated this platform with the enterprise use case of viewer-specific advertising (i.e. showing an advertisement for teen apparel to someone in the 13-18 year old demographic), but for the purposes of Dev Day, we decided to play hit songs that were popular when that viewer was a teenager.  Love the idea of using it for viewer-centric maps/directions too (thanks to our fellow Dev Day'ers that suggested that use case!).

The Weather Company, a recently acquired business of IBM, also had a demo table covering their portfolio of weather data solutions, including a huge amount of weather data available via APIs (our favorite!), which can be used for specific enterprise use cases across any industry that is impacted by weather.  The geographic granularity of the weather data (down to 0.1 miles) available for our apps/platforms and our enterprise clients is truly amazing and will enable us all to do some never done before things involving the predictive power of weather forecasting and how it impacts business. 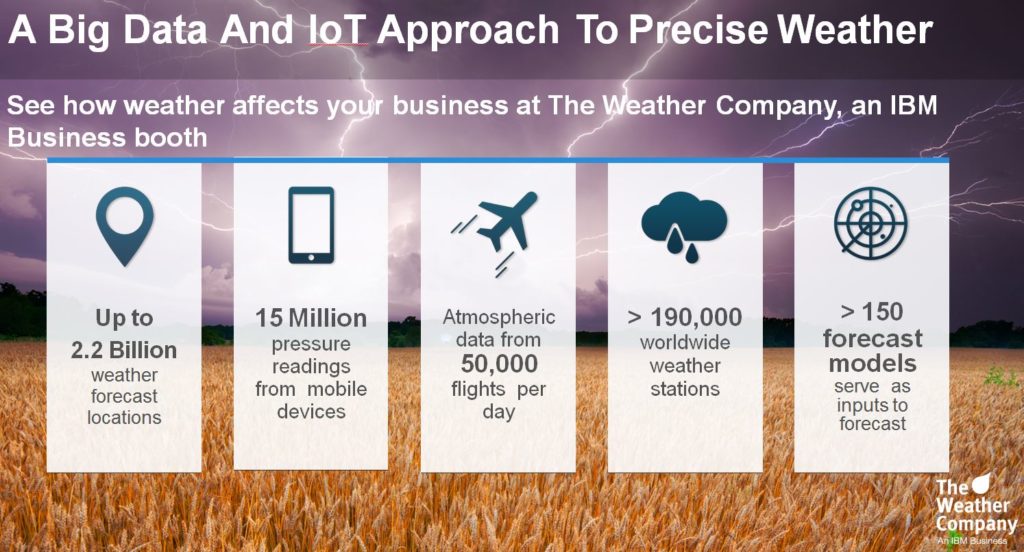 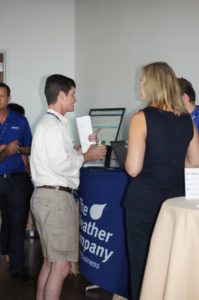 IBM Bluemix is the cloud PaaS platform that is the core of most all of the digital apps and services that we create, and the IBM Bluemix development team was nice enough to come down from Austin and volunteer to man that particular booth at Dev Day.  Bluemix is available via Public Cloud, Dedicated (public cloud), and Local (on-premise) deployment models and can be used to build pretty much any web or mobile app/platform/service needed.  Here was the signage from Dev Day on Bluemix, where a lot of the interest was on creating and maintaining mobile apps, specifically (although Bluemix can handle all forms of digital apps, including web/mobile/emerging). 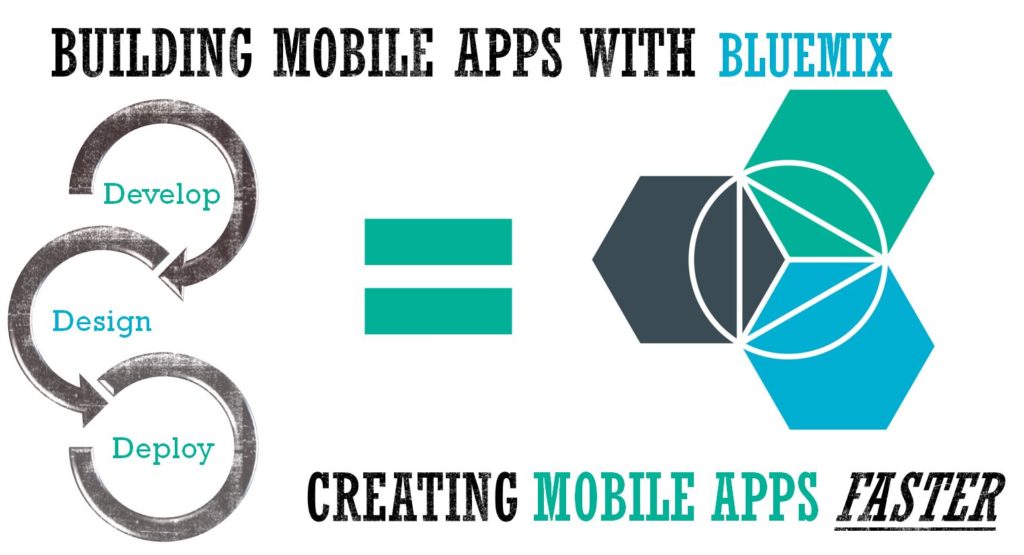 Mark III is a Docker partner and also offers numerous systems/technologies that utilize OpenStack for cloud automation (some which incorporate Docker as well).  As part of our Docker/OpenStack table, we had one of our DevOps engineers showcase the new Docker Datacenter suite (which we have running in our Houston lab), which includes key enterprise-centric components like Docker Universal Control Plane (UCP) and Docker Trusted Registry.  The recent Docker 1.12 release gave us some exciting things to talk to visitors about (Swarm mode!), as well as a demonstration in-person of how an enterprise-centric Containers-as-a-Service (Caas) model would work from a Docker standpoint. 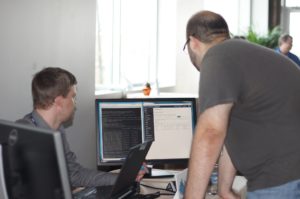 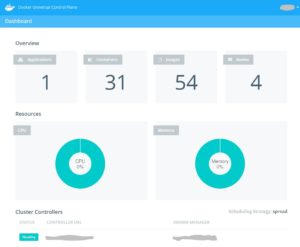 The newly renamed IBM Cloud Object Storage (aka Cleversafe) has been a focus area for both Mark III and BlueChasm over the past 8 months, since the acquisition by IBM was announced.  It's served as the API-driven "data foundation" not only for existing applications, but also as the key storage piece for pretty much all our digital apps/platforms that we're creating under the BlueChasm umbrella (and what we would recommend for our clients currently tackling similar digital initiatives).  This includes most of the applications we actually demonstrated at Dev Day, which all use IBM Cloud Object Storage (Video Recon, Cognitive Drone, Visual Communications, etc). 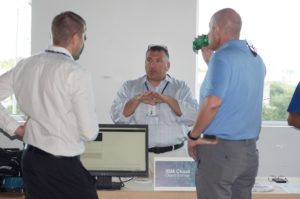 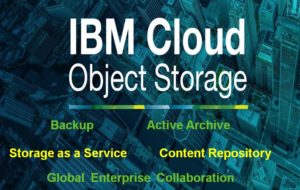 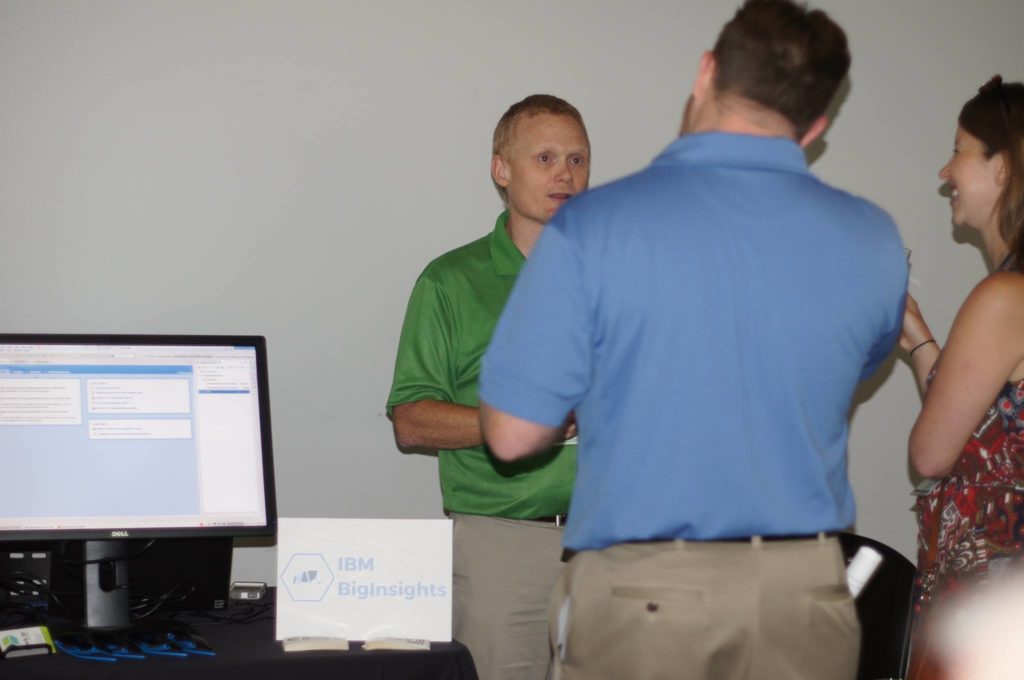 Last, but certainly not least, our friends at Brocade were on hand to demonstrate StackStorm, a DevOps-friendly automation framework that Brocade recently acquired.

Using StackStorm, you can orchestrate literally any type of event-driven automation across almost any tech stacks that you can think of (AWS, GitHub, Slack, Jenkins, JIRA, Azure, OpenStack, NodeJS, etc).  The integrations are what make this platform amazing in our opinion and the creative way in which Brocade is also tying in the StackStorm automation framework (which is open source) into networking infrastructure is pretty awesome, in our opinion.  Big fan of ChatOps too... the things you can automate and do directly from Slack are amazing. 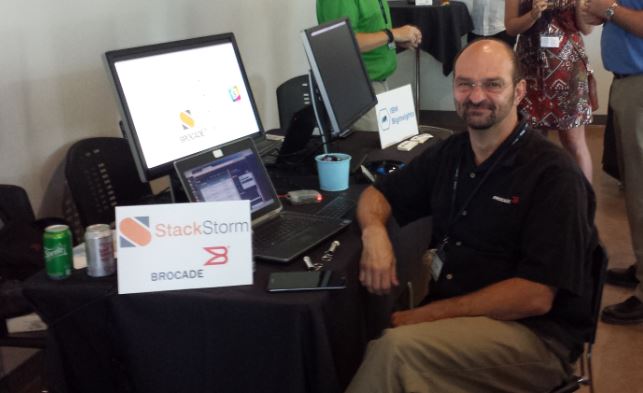 Thank you to everyone who attended Dev Day and for everyone who helped set up and make the meetup a huge success!

We'll definitely be looking forward to sponsoring future editions of Dev Day not only in Houston, but other major cities around the US (Dallas and Austin, you're next!).

If any of these technologies and/or projects/products interest you, please feel free to reach out to us directly at Mark III to start a conversation!

Our developers, DevOps engineers, Systems Engineers, and sales reps are ready to assist you in building your tech stacks, whether it be an emerging cognitive or IoT digital use case or simply refreshing a long-time, business-critical application or infrastructure stack. 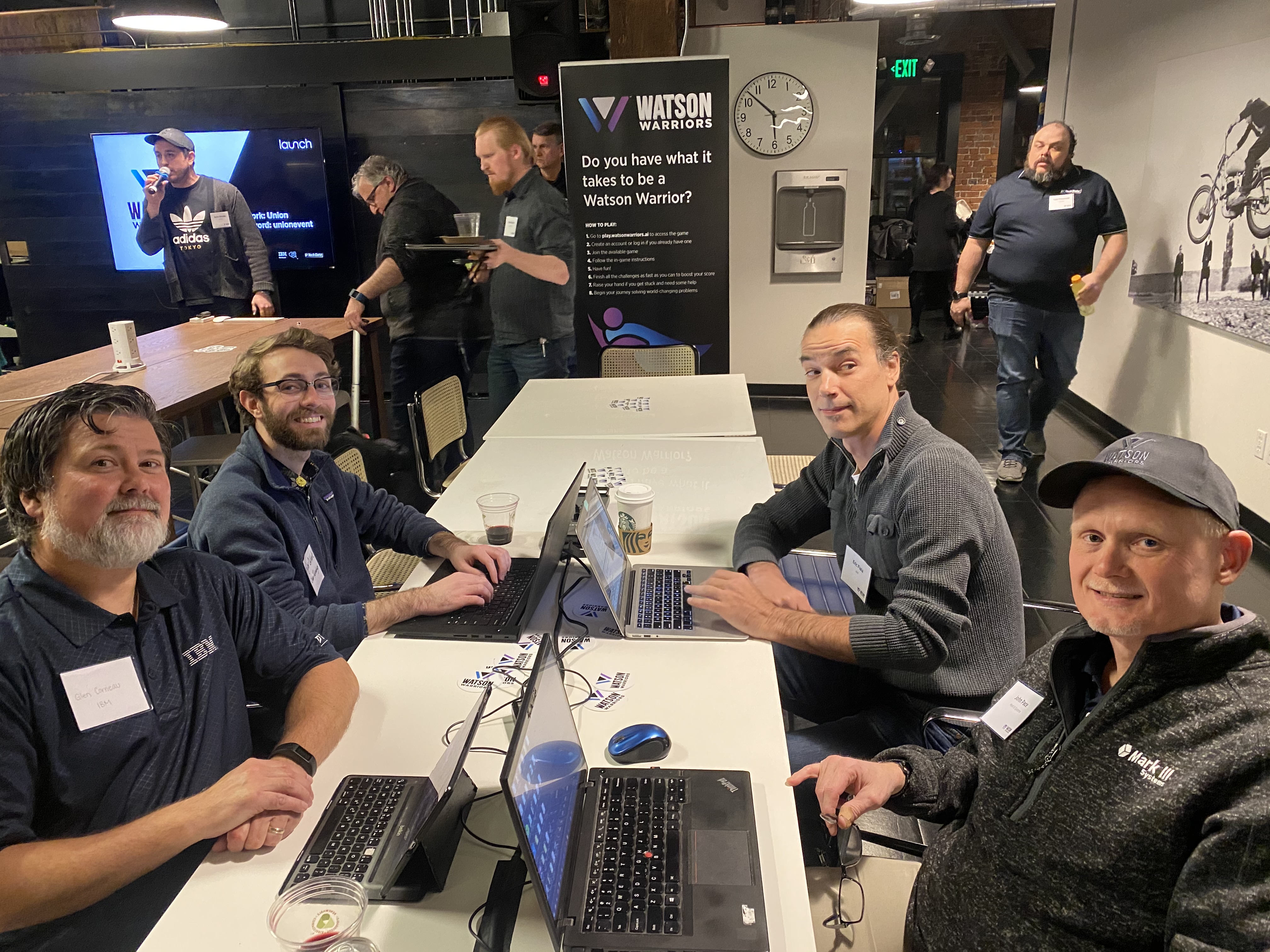 On January 15, I attended the Watson Warriors event in snowy Seattle, hosted by Tech Data.  Watson Warriors is a multi-challenge game, developed by Launch Consulting, that allows data scientists… 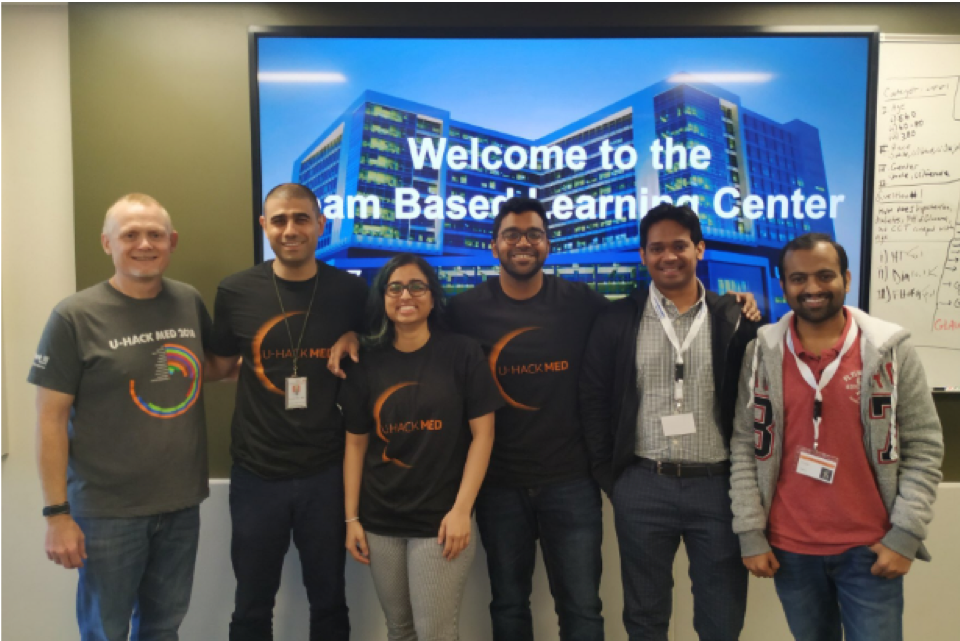 On November 8-10th, I was able to compete in The University of Texas Southwestern Medical School U-Hack Med Hackathon.  I attended the event last year and helped multiple groups as…