IBM announced in early September the innovative new NeXtScale system, which is the culmination of years of experience with the iDataPlex and BladeCenter platforms.  Much like how Flex Systems (Pure) have completely redefined density for virtualization and more general-purpose application workloads, NeXtScale is doing the same for HPC, Cloud, and compute-intensive workloads. 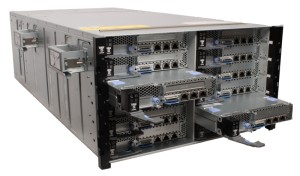 In short, if you need threads and raw CPU speed for your workload (and lots of it), NeXtScale provides a platform that's currently unrivaled in terms of density and ease-of-integration (i.e. everything shows up ready to go).  Normally I don't like to refer to other blogs as a primary source of information, but IBM published a couple pretty good blogs that sum up the NeXtScale platform and announcement.

If you didn't click on the links above, here are some highlights:

In short, if you need a lot of cores/CPUs and high-bandwidth on the backend, you really can't beat NeXtScale from a density and price-performance standpoint.

With that said, as most of you know, IBM is a platinum member of the OpenStack Foundation and has fully embraced OpenStack as its open standards strategy for cloud.  OpenStack has numerous projects and initiatives within its broad scope, but one of the most popular projects is OpenStack Compute (codenamed "Nova").    Nova enables users to provision and manage large networks of virtual machines across various hypervisors (KVM, XenServer, PowerVM, etc.).  These VMs can be easily spun up, spun down, and manipulated through a centralized, open source Nova cloud controller.

In its current form, most Nova users are utilizing OpenStack for "newer" web-centric applications, and not so much older legacy applications, which typically do a little bit better in "traditional" IT environments.  Most applications that thrive with Nova tend to need a lot of high-speed threads to run optimally (think web applications), and will lean on Nova to easily spin up and spin down these VMs as they are needed.  Accordingly, OpenStack Compute (Nova) will really thrive in a NeXtScale environment, where there is some degree of scale needed.  Additionally, NeXtScale can easily be ordered pre-configured and pre-integrated, which really helps to eliminate one of the biggest pains of maintaining and growing an OpenStack-powered compute farm.

Bottom line?  NeXtScale and OpenStack are a really good match for one another, and gives OpenStack users something unique from IBM from an x86 perspective that hasn't been there in the past.

SMU to launch AI supercomputer with NVIDIA and Mark III

November 16, 2021 – Mark III is excited and honored to announce that we’ll be working closely with SMU and NVIDIA on the launch of a new AI supercomputer based on…